This initiative is implemented on behalf of the European and African Union Commissions by:

Elizabeth Colucci is a project expert for the European University Association, focusing on international collaboration and development cooperation. She is also an adviser and project expert for EUA in the areas of higher education policy, internationalisation and higher education in development cooperation. Between 2008 and 2014 she was a programme manager in the Higher Education Policy Unit of EUA, working on a range of higher education reform issues, and overseeing EUA’s external relations with non-European countries. Elizabeth has developed and managed a range of European Commission-funded international projects for EUA, and also contributed to the Bologna Process working group (‘BFUG’) on the official strategy for the European Higher Education Area in a Global Setting. She has helped to develop policy positions and input regarding cooperation with a variety of regions, including Africa, Latin America, Asia and North America. She currently supports EUA’s dialogue with Arab universities and managers projects involving higher education reform and harmonisation in Southeast Asia, the European Neighborhood countries, Latin America and Africa. Prior to EUA, Elizabeth served as a senior officer at the Academic Cooperation Association (Brussels), and has also worked for the Fulbright Commission to Belgium and Luxembourg and for the Directorate for Education and Culture (EAC) of the European Commission. She holds a Master of Science in European politics and governance from the London School of Economics and completed her Bachelor degree in comparative international studies and French at Duke University (USA).

The University of Barcelona 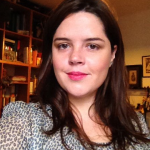 Nicole Font Guedes is Communication Manager for the University of Barcelona, specialized on communication strategies, international relations, and editorial management. Nicole Font is specialized in the communication management of international projects such as Horizon 2020, Erasmus + and other fundings.  She manages  the communication strategy of different project such as SPHERE, CAMINOS and MIMIR. She worked as a communication manager at the Catalan Association of Public Universities and was project & communication assistant for the Global University Network for Innovation (GUNi). She has also managed technical assistance for innternational projects and organised and participated conferences and seminars on Higher Education, academic research, university cooperation and RRI. She holds a Master on International Relations from the IBEI (Spain) and a Bachelor degree in Journalism  with experience. Her fields of expertise are  Internationalisation of Higher Education, Comparative Politics, Social Research and Cooperation for Development.

She has an extensive experience in project management and coordination of EU projects under the ALFA programme, TEMPUS programme, Erasmus Mundus and Erasmus+ CBHE. She has also managed technical assistance projects funded by the European Commission at the University of Barcelona and she is part of the SPHERE (Support to Higher Education Reform Experts) and HAQAA (Harmonisation of African Higher Education Quality Assurance and Accreditation) implementation teams.

Agustina is a sociologist, with research experience in the fields of Public Administration. Her main responsibilities have included EU-LAC Higher Education Policy analysis, Data Analysis and general project financial control.

The Association of African Universities

The Association of African Universities (AAU) founded in 1967 with an initial membership of 34 universities, currently has 360 member institutions spread across 46 African countries. The Association’s mandate as an apex organization for higher education in Africa is to promote cooperation, academic linkages and exchange of information on higher education issues across the continent as well as supporting its members in their core functions of teaching, learning, knowledge generation and its dissemination through fundamental and applied research and community engagement. Additionally, the AAU plays a key advocacy role in raising awareness for and about the major needs of African higher education institutions, and as far as practicable, also coordinates the means by which these needs are met. The Association also acts as a catalyst for increased networking between its members and the wider African and international academic community.

Before joining AAU, Dr. Makuku was a Quality Assurance Director at the Bindura University of Science Education where earlier on she was a lecturer of Curriculum Studies, Pedagogy and Research Methods for more than 10 years in the Faculty of Science Education. She was also the Southern African Development Community (SADC) representative for assuring quality internship for UNISA students based in Zimbabwe as well as an external assessor. Dr. Makuku has been widely involved in University Quality Assurance activities including research and the designing of University Quality Assurance courses/modules. In addition, she is a reviewer of articles for a number of international journals. She also has a lot of experience in the designing and development of University Quality Assurance monitoring and evaluation mechanisms and tools. She designed and wrote a number of quality assurance documents for university use. Dr. Makuku attended numerous quality assurance workshops and conferences both as a facilitator and a participant.

Jonathan Chuks Mba, PhD, is currently the Director of Research & Academic Planning/Coordinator of Quality Assurance and other Projects at the Association of African Universities (AAU), Accra, Ghana. Before joining the AAU he has worked at the University of Ghana for 12 years having attained the position of Associate Professor at the Regional Institute for Population Studies (RIPS), University of Ghana, Legon, Ghana. He has worked as the Deputy Director at RIPS for about four years and the Coordinator of academic programmes at RIPS for seven years. Additionally, he has worked as the Acting Executive Director of the Union for African Population Studies (UAPS) for two years. He has written extensively in peer-reviewed journals, and contributed to reports and book chapters.  He has edited three books and is the author of one book. Prof. Mba has Ph.D, MPhil, and M.A. degrees in Population Studies and B.Sc (Hons.) degree in Statistics.

EUA is a pan-regional university association representing over 800 universities in the European Higher Education Area as well as 33 national rectors conferences. It is the leading university voice at European policy level and is an active partner of the European Commission when it comes to supporting policy development and carrying out European led projects for higher education reform and development. It is also an official consultative member of the Bologna Process and participates in all intergovernmental working groups of the Bologna Follow-Up Group (BFUG).

Tia Loukkola is the Director of the Institutional Development Unit at EUA. In that capacity she has responsibility for all of EUA’s activities and projects related to quality assurance and rankings. She also oversees EUA’s contribution to policy development in these fields, including through representation in the E4 Group and in the working groups of the Bologna follow-up group. She has authored EUA publications, policy documents and articles on quality assurance and is regularly invited to speak at events about European quality assurance.

Since 2004, the European Association for Quality Assurance in Higher Education promotes European cooperation in the field of quality assurance. ENQA is a membership organisation which represents 44 quality assurance agencies in the field of European Higher Education operating in all the signatory states of the Bologna Declaration. ENQA also has 47 Affiliates world-wide. ENQA drives the development of quality assurance by representing agencies internationally, supporting them nationally and providing them with comprehensive services and networking opportunities. ENQA promotes the enhancement of quality and the development of a quality culture in higher education. ENQA’s activities comprise events, trainings, international quality assurance projects and cooperation with stakeholders. In addition, ENQA coordinates the reviews of agencies against the Standards and Guidelines for Quality Assurance in the European Higher Education Area (ESG). One of ENQA’s tasks is to represent its members at the European level and internationally, especially in political decision-making processes and in co-operation with stakeholder organisations. Therefore, active participation in the Bologna Follow up Group (BFUG) as a consultative member forms an important part of ENQA’s policy making role.

Maria Kelo is currently serving as the Director of the Secretariat of the European Association for Quality Assurance in Higher Education (ENQA) and has a wide range of experience related to higher education. Her tasks within ENQA include: to manage the work of the ENQA Secretariat, act as Secretary to the ENQA Board, support and coordinate ENQA member agencies, manage projects, and represent the association. She previously worked as Senior Officer for the Academic Cooperation Association where she was actively involved as an expert in higher education policy developments and reforms at national and European level (Bologna, ET2010); higher education internationalisation and international cooperation; mobility; student services and attractiveness of European higher education; trans-national education. Maria is actively involved in issues concerning the quality assurance in higher education, the European Higher Education Area and the Bologna process, and internationalisation of higher education. In the HAQAA Initiative, Maria will provide the consortium with managerial and content advice and support.

Paula Ranne is the Deputy Director of the Secretariat of the European Association for Quality Assurance in Higher Education (ENQA). She is responsible for several statutory and planning duties of the association, as well as for projects on various themes, such as on the quality assurance of cross-border higher education. She worked for ENQA in Helsinki, Finland, in 2008-2011 and joined the association again in 2014, following its relocation to Brussels, Belgium. Before rejoining ENQA, Paula worked in Finland in positions relating to higher education and science policies in all academic fields. Most recently, she worked at Universities Finland UNIFI as Senior Advisor, where one of her main responsibilities was the launching of a national student survey, which was taken into use in all Finnish universities in 2013. Paula holds a Master of Social Sciences degree with a major in social policy and other studies including management and political science. In the HAQAA Initiative, Paula is the main contact person at ENQA, as she is responsible for the coordination and execution of ENQA’s activities.

Anaïs Gourdin is the Project and Finance Officer of the European Association for Quality Assurance in Higher Education (ENQA) since June 2014. Anaïs joined ENQA in 2012, first as a trainee and then as Administrative Assistant. Her main tasks include managing financial matters for the association and providing support in EU projects. Anaïs studied foreign languages applied to international affairs and project management and is a graduate of Université Jean Monnet, Saint Etienne and Aix-Marseille Université. In between her studies, Anaïs worked as a French assistant in a secondary education institute. In the HAQAA Initiative, Anaïs will take care of ENQA’s financial management and reporting.

The German Academic Exchange Service (DAAD) is a joint Organisation of German institutions of higher education and their student bodies, devoted to internationalising the academic and scientific research system. With the scholarship programmes, the DAAD enables students, researchers and university lecturers to take advantage of the best study and research opportunities available. It promotes transnational cooperation and university partnerships, and is the German national agency for EU higher education cooperation.

Gudrun Chazotte is Senior Desk Manager working in the division of development cooperation at DAAD. She is holder of a master´s degree in history and published several articles. Gudrun joined DAAD in 1996 and has been coordinating international higher education cooperation projects and developing new DAAD-programme lines, especially focusing on linkages between business and higher education institutes since then. Being proficient in German, English, French and Spanish, she has organised several conferences on business/university linkages and Quality Assurance related topics in Latin America and Africa. Since 2013, she´s responsible for the DAAD-DIES Quality Assurance projects in Africa.