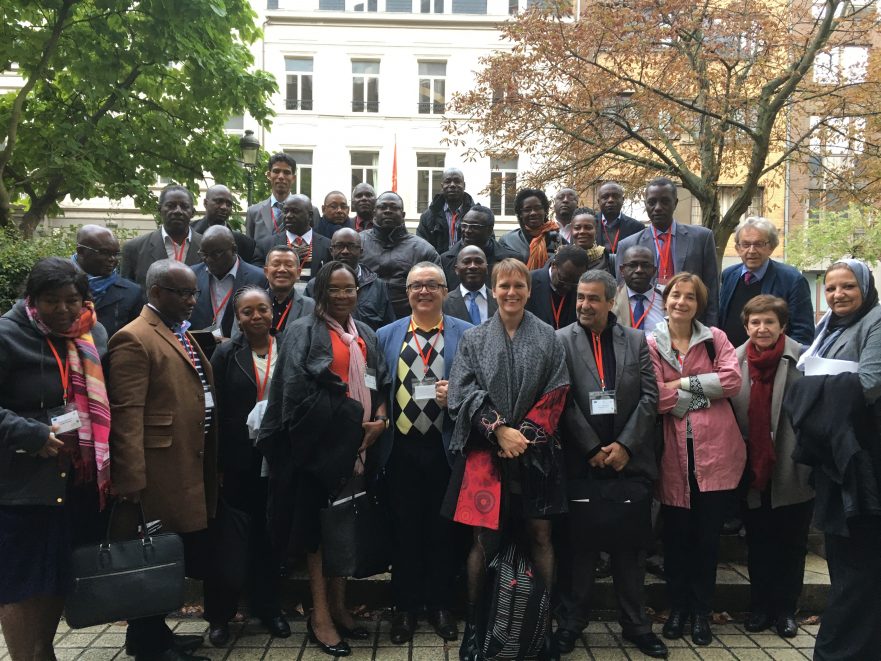 The Harmonization of African Higher Education Quality Assurance and Accreditation (HAQAA) Initiative consortium held a successful 5 day training workshop in Brussels, Belgium & Bonn, Germany as part of the implementation of its lined up programmes and events that are meant to immensely benefit African Higher Education. This training workshop in French will be followed by another one for the English speaking participants from the 28th of November to the 3rd of December 2016. The theme of the training workshop entitled “A COMMON UNDERSTANDING OF QUALITY ASSURANCE IN AFRICA” was conducted by the Germany Academic Exchange Service (DAAD), which was represented by Mrs Gudrun Chazottee on behalf of the HAQAA initiative consortium. She also played a key role as one of the key facilitators and overseer of the training workshop.

The DAAD is one of the 5 members of a consortium which includes the University of Barcelona (Coordinator), The Association of African Universities (AAU), The European University Association (EUA) and The European Association of Quality Assurance in Higher Education (ENQA). This training workshop including airfares and hotel accommodation for both facilitators and participants was funded by the European Commission under the HAQAA Initiative. This initiative which came out of the European and African Commissions’ Strategic partnership represented by Diedrie Lenan and Yohannes Woldetensae is wholly funded by the European Commission. The consortium is headed and coordinated by Prof Ramon Torrent of the University of Barcelona with the assistance of Elizabeth Colucci who is the project manager.

Quality assurance experts who facilitated the course were drawn from various established quality assurance organizations and associations across Africa and Europe including The Inter-University Community of East Africa (IUCEA), the African and Malagasy Council for Higher Education (CAMES), DAAD, ENQA, AAU, Multi-rank, the Arab Network for Quality Assurance in Higher Education (ANQAHE), among others. Ms Elizabeth Colucci of the University of Barcelona gave an overview of the HAQAA initiative, Pan African Quality Assurance Framework (PAQAF) and the African Quality Rating Mechanism AQRM as well as how they are linked. She also highlighted the activities lined up by the HAQAA initiative consortium which include the training of quality assurance personnel and institutional evaluations of selected African universities, among other activities. A lot more on PAQAF was elaborated by Mrs Adeline Addy of AAU. Dr Violet Makuku, the HAQAA initiative project officer based at the AAU headquarters in Accra, Ghana also presented on the steps that were being taken to come up with the African Standards Guidelines (ASG) as one of the HAQAA initiative’s main goals. She explained that the designing and formulation of such guidelines which would be similar to the European Standards Guidelines (ESG) could act as a backbone and a vehicle through which the harmonization of African Higher Education quality assurance and accreditation can be achieved. This put the participants into a perspective to understand the context of the whole training workshop.

The group of participants which was made up of 2 women from Tunisia and Cameroon and 22 men represented the African Francophone and 3 Lusophone countries, Mozambique, Angola and Cape Verde. The rest of the countries represented included Burkina Faso, Mali, Congo Brazaville, The Democratic Republic of Congo, Togo, Senegal, Niger, Benin, Angola, Algeria, Chad, Gabon, Madagascar, Cote d Ivoire, Benin, Central African Republic and Morocco. The participants were strategically selected from their countries’ Quality Assurance Agencies (QAAs) and if the country had none, selection was then done targeting top personnel in the Ministry of Higher Education or its equivalent. Such participants would easily get funding from their respective governments to disseminate the valuable knowledge and information obtained from the just ended workshop. The workshop ended on a high note with participants highly thankful of all involved in organizing such a workshop. They also greatly appreciated the knowledge and information they got which they could never get if it was not for this kind of a workshop.